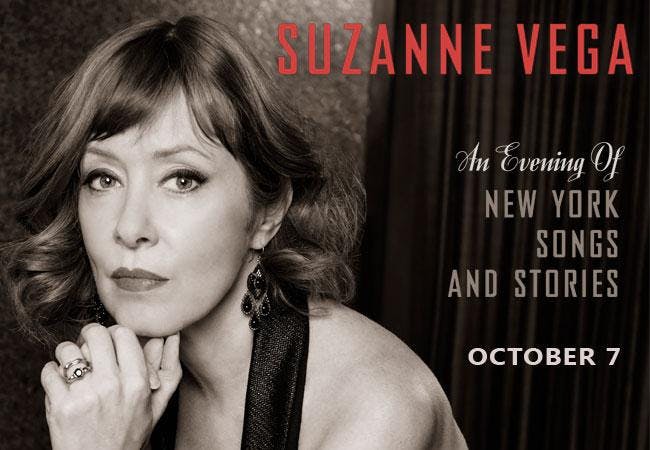 Grammy Award-winning artist Suzanne Vega will celebrate the release of her new, career-spanning live album, An Evening of New York Songs and Stories (out September 11 via Amanuensis/Cooking Vinyl) with a livestream event from New York’s iconic Blue Note Jazz Club on October 7 and 8. The first of the two performances will be timed for North American audiences and the second for UK and European fans. The full-band set will feature the album’s New York-centric repertoire, honoring Vega’s long musical relationship with her city.

At the Blue Note, Vega will be joined by longtime guitarist Gerry Leonard, bassist Jeff Allen and keyboardist Jason Hart. Recorded in early 2019, An Evening of New York Songs and Stories includes familiar songs like “Luka” and “Tom’s Diner” alongside deep cuts from her catalog like “Frank and Ava” and “Ludlow Street.” The mix of repertoire also features “New York Is My Destination” from Lover, Beloved: Songs from an Evening with Carson McCullers, Vega’s one-woman play about the Southern gothic novelist Carson McCullers. An Evening of New York Songs and Stories was produced by Leonard, mixed by Grammy Award-winning engineer Kevin Killen and mastered by Grammy Award winner Bob Ludwig.

Widely regarded as one of the foremost songwriters of her generation, Suzanne Vega emerged as a leading figure of the folk-music revival of the early 1980s. Since the release of her self-titled, critically acclaimed 1985 debut album, her songs have become part of the contemporary music vernacular.